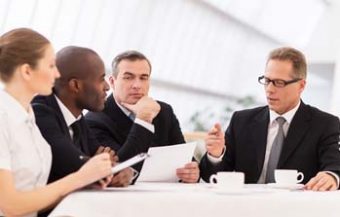 We will advertise new research projects that emerge from this network members jointly and individually. 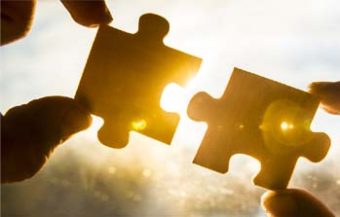 Two kinds of partnerships are possible: 1. Institutional; and 2. Individual scholars who work in this area.

The project is managed by a director and several coordinators who specialize on key regions of the world who also act as the steering committee members. 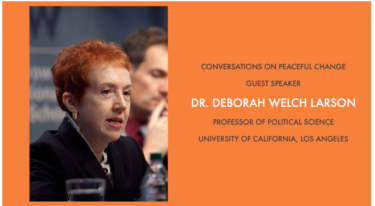 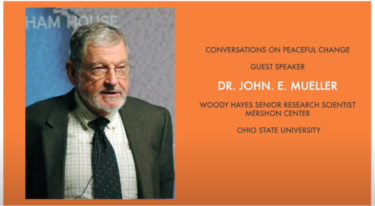 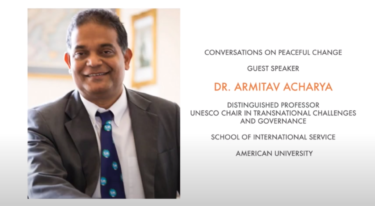 Conversations on Peaceful Change: An Interview with Dr. Amitav Acharya 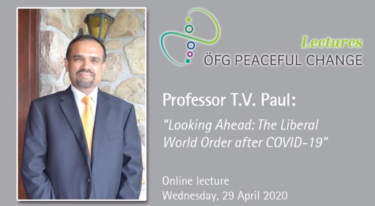 T.V. Paul: Looking Ahead: The Liberal World Order after COVID-19

In this ÖFG Peaceful Change lecture Dr. Markus Kornprobst, who holds the Chair in International Relations at the Diplomatic Academy of

Bhubhindar Singh is an Associate Professor at the S. Rajaratnam School of International Studies (RSIS), Nanyang Technological University (NTU), Singapore. Before joining NTU, Bhubhindar was a Sasakawa Lecturer in Japanese Studies at the School of East Asian Studies, University of Sheffield. He is a recipient of the Fulbright Award, and has held visiting positions at George Washington University, and National Institute of Defense Studies (NIDS), Japan. At RSIS, Bhubhindar is the Coordinator of the Regional Security Architecture Programme (RSAP), and Deputy Head of the Graduate Programmes Office (GPO). Bhubhindar’s main research area is in the international relations of Northeast Asia with a special focus on Japan’s security policy. His secondary research areas are international relations of Southeast Asia and security regionalism in East Asia. Bhubhindar has published in the European Journal of International Relations, International Relations of Asia-Pacific, The Pacific Review, Australian Journal of International Affairs, Asian Survey, Asian Security, Asia Policy, Japanese Journal of Political Science, Korean Journal of Defense Analyses, The Round Table, Contemporary Southeast Asia and Issues & Studies; and his book is entitled Japanese Security Identity Transformation: From a Peace-State to an International-State (Routledge 2013). Bhubhindar is a member of the Editorial Advisory Committee of the Asia Policy journal (published by the National Bureau of Asian Research).

In November 2018, Paul was inducted into the Royal Society of Canada as a Fellow. In December 2009, Paul’s Book, The Tradition of Non-use of Nuclear Weapons was selected for inclusion in the Peace Prize Laureate Exhibition honoring President Barack Obama by the Nobel Peace Center, Oslo. Power versus Prudence was selected as an ‘Outstanding Academic Title for 2001’ by the Choice Magazine and as a “Book for Understanding’ by the American Association of University Presses. In March 2005 Maclean Magazine’s Guide to Canadian Universities rated Paul as one of the “most popular professors” at McGill University and in May 2005 Paul became the recipient of High Distinction in Research Award by McGill’s Faculty of Arts. During 2009-12 he served as the Director (Founding) of the McGill University/Université de Montreal Centre for International Peace and Security Studies (CIPSS). He has held visiting positions at Nanyang Technological University, Singapore (2014, 2017 &2018); Diplomatic Academy, Vienna (2014 onwards); UC Berkeley (2013); East-West Center, Honolulu (2013); the Naval Postgraduate School, Monterey (2002-03), Harvard University (1997-98), and as the KPS Menon Visiting Chair for Diplomacy (2011) and Erudite Fellow (2016) at the MG University, Kottayam, India. In addition to President, during 2009-11, he served as the Chair of the International Security Section (ISSS) of the ISA; in 2013-14 as Vice-President of ISA. As ISA president, he spearheaded a taskforce on improving conditions of Global South scholars in international studies. In 2010 he was appointed as the editor of the Georgetown University Press book series: South Asia in World Affairs. He is the founding director of GRENPEC and currently developing the network’s research agenda along with several colleagues from different parts of the world. For more, see: www.tvpaul.com

Arie M. Kacowicz is Professor of International Relations and the Chaim Weizmann Chair in International Relations at the Hebrew University of Jerusalem, Israel.  He received his Ph.D. from Princeton University in 1992 and has been a Visiting Professor at Georgetown University, Universidad Salvador (Buenos Aires), Alfonso X (Madrid), and the University of Notre Dame.  A Faculty member since 1993, he was the Chair of the Department of International Relations in 2005-2008 and currently is the President of the Israeli Association of Israeli Studies.  His research interests include peace studies, international relations of Latin America, globalization and global governance, and the normative dimension of international relations. His publications include Globalization and the Distribution of Wealth: The Latin American Experience, 1982-2008 (Cambridge University Press, 2013), Routledge Handbook of Latin American Security (co-edited with David Mares, Routledge 2016), and The Relevance of Regions in a Globalized World: Bridging the Social Sciences – Humanities Gap (co-edited with Galia Press-Barnathan and Ruth Fine, Routledge 2019); Peaceful Territorial Change (University of South Carolina Press: Columbia, SC, 1994);  Zones of Peace in the Third World: South America and West Africa in Comparative Perspective (Albany, NY: SUNY Press, 1998).

Kate Sullivan de Estrada is Director of the Contemporary South Asian Studies Programme and Associate Professor in the International Relations of South Asia at the University of Oxford. Her research seeks to understand India’s identity as a rising power and its behavior in relation to key institutions and norms of global governance. Her work on India and status seeking has engaged with the strategies Indian elites have adopted to seek accommodation and recognition within the global order, most extensively in her book with Rajesh Basrur, Rising India: Status and Power (2017). Other single-authored and co-authored works centre on conceptions of Indian exceptionalism; practices of compliance and resistance in India’s self-projection as a rising power; India’s conformity and innovation in relation to the nuclear non-proliferation regime (with Nicola Leveringhaus); and continuity and change in India’s approaches to non-proliferation and global climate governance (with Manjari Chatterjee Miller). What unites this work is Kate’s interest in deeply understanding the agency of rising powers — in particular how non-Western rising powers experience, respond to, and often (but certainly not always) reproduce hegemony ‘from below’. Deeply understanding rising power agency is crucial for assessing and proposing pathways for global peaceful change. Will rising powers conform to expectations of conflict-driven power transition or seek to avoid these? Will they uphold existing institutional norms and practices of global governance or seek to innovate new ones?  A deeper theorization of rising power agency, centered on the case of India, is the subject of Kate’s new monograph-in-progress.

Deborah Welch Larson is professor of political science at the University of California, Los Angeles. She received her Ph.D. from Stanford University.  Her research interests include the role of status concerns in influencing foreign policy, trust, and the use of psychology to explain American foreign policy decision making.  Her publications include: Origins of Containment: A Psychological Explanation (Princeton: Princeton University Press, 1985); Anatomy of Mistrust: US-Soviet Relations during the Cold War (Ithaca: Cornell University Press, 1997); and Status and World Politics (Cambridge: Cambridge University Press, 2014) (co-edited with T. V. Paul and William Wohlforth). Her book Anatomy of Mistrust applies social psychology to history to show how mistrust led to missed opportunities for U.S.-Soviet cooperation. That book continues to provoke scholarly interest and was featured at a 2011 conference of political scientists and historians at the Woodrow Wilson Center and in a subsequent edited volume by Stanford University Press, Trust but Verify (2016). She has most recently published Quest for Status: Chinese and Russian Foreign Policy (New Haven: Yale University Press, 2019), with Alexei Shevchenko, which uses social identity theory from social psychology to explain how China and Russia have used various strategies of emulation, competition, and creativity to gain recognition from other countries and thus validate their respective identities. Larson was a member of the Distinguished Jury for the 2019 Grawemeyer World Order Award.  Larson has served as Chair of the International History and Politics Section and President of the Foreign Policy Section for the American Political Science Association.  She was President of the Foreign Policy Analysis Section of the International Studies Association.  She is currently an Associate Editor for the journal Foreign Policy Analysis.

Kai He is Professor of International Relations at Griffith Asia Institute and Centre for Governance and Public Policy, Griffith University, Australia. He is a visiting Chair Professor of International Relations at the Zhou Enlai School of Government, Nankai University, China (2018-2021). He is currently an Australian Research Council (ARC) Future Fellow (2017-2020). He was a postdoctoral fellow in the Princeton-Harvard China and the World Program (2009-2010). He is the author of Institutional Balancing in the Asia Pacific: Economic Interdependence and China’s Rise (Routledge, 2009), Prospect Theory and Foreign Policy Analysis in the Asia Pacific: Rational Leaders and Risky Behavior (co-authored with Huiyun Feng, Routledge, 2013), and China’s Crisis Behavior: Political Survival and Foreign Policy (Cambridge, 2016). He is a co-editor (with Huiyun Feng) of US-China Competition and the South China Sea Disputes (Routledge, 2018) and Chinese Scholars and Foreign Policy: Debating International Relations (with Huiyun Feng and Xuetong Yan, Routledge, 2019). He is currently leading a research project “How China Sees the World” funded by the MacArthur Foundation, USA (2016-2019).

Harold Trinkunas is the Deputy Director of and a Senior Research Scholar at the Center for International Security and Cooperation at the Freeman Spogli Institute for International Studies at Stanford University. Prior to arriving at Stanford, Trinkunas served as the Charles W. Robinson Chair and senior fellow and director of the Latin America Initiative in the Foreign Policy program at the Brookings Institution. His research focuses on issues related to foreign policy, governance, and security, particularly in Latin America. Trinkunas has co-authored Militants, Criminals and Warlords: The Challenge of Local Governance in an Age of Disorder (Brookings Institution Press, 2017), Aspirational Power: Brazil’s Long Road to Global Influence (Brookings Institution Press, 2016) and authored Crafting Civilian Control of the Military in Venezuela (University of North Carolina Press, 2005). He co-edited and contributed to American Crossings: Border Politics in the Western Hemisphere (Johns Hopkins University Press, 2015), Ungoverned Spaces: Alternatives to State Authority in an Era of Softened Sovereignty(Stanford University Press, 2010),  and Terrorism Financing and State Responses (Stanford University Press, 2007).  Trinkunas previously served as an associate professor and chair of the Department of National Security Affairs at the Naval Postgraduate School in Monterey, California. He received his doctorate in political science from Stanford University in 1999.

Anders Wivel is Professor with special responsibilities in the Department of Political Science, University of Copenhagen. His research interests include foreign policy, in particular the foreign policies of small states, and international relations theory, in particular the realist tradition. His work has been published in a large number of academic journals including, e.g. Cooperation and Conflict, International Studies Review, Journal of Common Market Studies and Journal of European Integration. His most recent books are The Routledge Handbook of Scandinavian Politics (Routledge, 2018, co-edited with Peter Nedergaard) and International Institutions and Power Politics: Bridging the Divide (Georgetown University Press, 2019, co-edited with T.V. Paul). From 2017 to 2019 he served as chief investigator and deputy director of research at The Independent Inquiry of Denmark’s Military Participation in Kosovo, Afghanistan and Iraq.

Attendees at the GRENPEC Launch Meeting in Toronto, March 27, 2019

This roundtable will examine the causes and conditions that generate peaceful change in world politics, both at macro and micro-levels. When do we get peaceful power transitions, and non-violent accommodations and when do the opposite happen? Are all peaceful transitions good? What structural, and normative conditions are associated with peaceful change? What policy advice IR theorists can offer for transitions without war, especially in the current context involving China and the US?